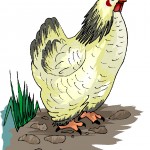 President Obama and his dwindling ranks of supporters say American credibility is at stake if we don’t “strike” Assad. American credibility isn’t at stake; Mr. Obama’s is–along with the Democrats’. After all those years of politicizing the wars in Afghanistan and Iraq, of telling the American people that we shouldn’t go to war over foreign oil, of saying we can’t be the world’s policeman, of accusing Bush of lying, the American people believed them.

I think that, to borrow a phrase, the chickens are finally coming home to roost.