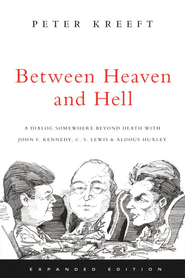 Here’s a review I wrote a few years ago tangentially related to the 50th anniversary today of the deaths of C.S. Lewis and Jack Kennedy. You’ll need to subscribe to B&C to see the whole thing, but you were going to do that anyway, right?

It is November 22, 1963. Three luminaries—John F. Kennedy, Aldous Huxley, and Clive Staples Lewis—have just died and will soon commence a great debate about issues of ultimate significance. In the first line of Peter Kreeft’s classic 1982 book, Between Heaven and Hell, JFK asks, “Where the hell are we?” Reading the prolific Boston College philosophy professor’s latest work, Between Allah and Jesus: What Christians Can Learn from Muslims, I had a similar reaction.

By the way, reading Between Heaven and Hell is a great way to mark the 50th anniversary.