Discovering God: The Origins of the Great Religions and the Evolution of Belief 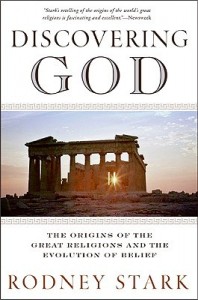 In Discovering God, award-winning sociologist Rodney Stark presents a monumental history of the origins of the great religions from the Stone Age to the Modern Age and wrestles with the central questions of religion and belief.

Having recently read of the Greek religious innovator Pythagoras in The End of Sparta, this seems like a good time for me to explore Stark’s fascinating thesis, which allows for much more of God’s activity than I’ve considered in the founding of several world religions in the sixth century B.C. I’ll let you know what I think when I get through this massive, and novel, tome.