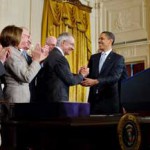 Reports continue to circulate that the president is weighing “executive action” on immigration and on Guantanamo Bay “after the election.” In other words, when Mr. Obama and the Democrats are safe from voters’ wrath, they plan to act against the wishes of the American people and in defiance of Congress, which is the body of government that most directly represents the people.

Folks, the election next month really is Barack Obama’s last election. As he has said, he’s not on the ballot, but issues near and dear to him are. If you’ve had enough of his “leadership,” please vote against those issues and the people who support them. The first order of business is for Republicans to gain control of the U.S. Senate and remove the obstructionist Harry Reid as Senate Majority Leader.

One Response to Action