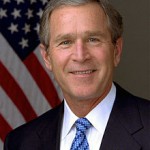 (1) Bush wasn’t lying when he said there were WMDs in Iraq. The country had thousands of them; we were just never able to discover any new programs or delivery systems (perhaps these had been dismantled and spirited out the country before the fighting started?). There’s a chance that these weapons, which supposedly “didn’t exist,” now will fall into the hands of ISIS.

(2) Mr. Obama spent $800 billion on a “stimulus” program that didn’t stimulate, but somehow he couldn’t find the money necessary to construct 13 regional disease detection centers recommended by the CDC in 2008 to respond to emerging health threats such as Ebola. Six years later, we have only 10 of the centers, not the 18 that were recommended.

So which president would you rather have now, America?