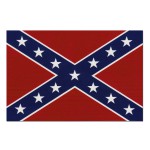 I know that the Confederate flag had nothing to do with the slaughter of black Christians in Charleston, that removing it would be another example of symbolism over substance, that to acquiesce on this point would be only to encourage the Left, which never tires of this kind of thing, that many people take pride in this symbol of Southern culture and gallantry, and that banishing it from state grounds would do nothing to help African Americans in society today.

However, given its undeniable connection with slavery and the unsettled racial climate in which we find ourselves, discretion is the better part of valor. May Christian humility rule, and may supporters of this flag give up their “rights” in order to demonstrate their love and forbearance on this issue. This would be a fitting tribute to those who died and their loved ones. Sometimes symbolic acts really do matter. And this is one of those times.