The following article is located at: http://www.booksandculture.com/articles/2010/marapr/whosesubmission.html and is used with permission.

Between Allah and Jesus
What Christians Can Learn from Muslims
Peter Kreeft
InterVarsity Press, 2010
184 pp., $16, paper

It is November 22, 1963. Three luminaries—John F. Kennedy, Aldous Huxley, and Clive Staples Lewis—have just died and will soon commence a great debate about issues of ultimate significance. In the first line of Peter Kreeft’s classic 1982 book, Between Heaven and Hell, JFK asks, “Where the hell are we?” Reading the prolific Boston College philosophy professor’s latest work, Between Allah and Jesus: What Christians Can Learn from Muslims, I had a similar reaction.

This book seems to stand the earlier one on its head—or at least its spine. In Between Heaven and Hell, Lewis the Christian apologist asks penetrating questions and steers his nominal Catholic and liberal intellectual compatriots toward the truth of Christ. In Between Allah and Jesus, however, it is the Muslim protagonist who serves as the primary light-bearer in religious matters, who usually gets the last word and exposes the prejudices and logical fallacies of the Christians around him. 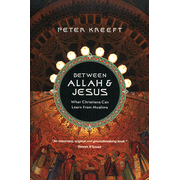 This character’s name is ‘Isa (the Muslim name for Jesus). Just as Lewis the Oxford don served as a representative for Christ, so ‘Isa the college student can be seen as one of “the least of these,” a stand-in for the Lord. In several instances, ‘Isa even claims to be a better Christian than his Christian foils. Further, ‘Isa’s nickname is Jack, which of course happened to be Lewis’s nickname, too.

So, where are we with Between Allah and Jesus? More important, where is Kreeft headed?

Like Kreeft’s Lewis, the Muslim “Jack” is a voice of reasoned religious debate—even presenting a variation on the famous “trilemma” argument for Muhammad. He passionately discusses submission to God, the evils of abortion, and other issues with a cast of less well-formed Christian characters. There’s Libby, the liberal Christian; Evan, the intelligent but emotionally cold fundamentalist evangelist; Father Heerema, the Jesuit professor who seems to come closest to speaking for Kreeft; and Father Fesser, the liberal priest.

In the introduction Kreeft openly admits his approach:

I have unfairly “stacked the deck”: I have made ‘Isa a very smart and articulate Muslim, an “idealized” Muslim (though he has conspicuous social and psychological faults of insensitivity and bluntness), while I have made the Christians, especially Libby, less than flawless Christians.
Kreeft does this to highlight a trait that he sees more in Muslims than in Christians—”spiritual toughness” or “strength of will.” And indeed ‘Isa seems more confirmed in his beliefs than the Christians do in theirs. ‘Isa outspokenly critiques the decadent West, condemns abortion as evil, and matter-of-factly believes that societies should base their laws on the Qur’an.

‘Isa says that the core of all true religion is surrender (in Arabic, islam) to God. “Because I am Allah’s slave,” he tells Libby in the chapter about surrender, “I am not the slave of any man or woman, or any society or culture, or any ideology or philosophy, or any drink or drug, or any thing at all. I am totally free because I am totally Allah’s slave. That is the proudest boast of any Muslim: to be Allah’s slave.” Such words resonate with serious Christians, who experience freedom as faithful bond-slaves of Christ. As Dietrich Bonhoeffer said, “Only he who believes is obedient and only he who is obedient believes.”

Much of Between Allah and Jesus offers such resonances between biblical and Qur’anic faith. Kreeft suggests that Christianity and Islam face common enemies—sin, Satan, and secularism, for starters. Might Christians and Muslims find common cause in the current culture wars?

Kreeft’s book is a strong encouragement to look past our theological differences, create bonds of friendship and trust, and work together for the common good. The dialogue begun at Yale in 2008 among Christians, Muslims, and Jews helpfully illustrates this spirit. Many of ‘Isa’s arguments, in fact, such as his descriptions of men’s and women’s roles, could have just as easily come from the mouth of a conservative Christian, suggesting how much common ground there might be moving forward.

When questioned about violence and terror done in the name of Islam, ‘Isa deflects critics by saying the perpetrators are not acting as good Muslims—and he points out that Christians did much the same when they had the opportunity. Yet there is no wrestling with problematic Qur’anic texts, such as Sura 4:89: “But if they become those who deny (Faith), catch them (by force) and kill them wherever you find them; And do not take friends or helpers from their groups.”

‘Isa says that the cause of Muslim violence is not the Qur’an but bad people, and Father Heerema also praises the Muslim holy book. If their take is accurate, then such passages need explanation. Christianity’s book and history have faced much scrutiny over the years. Why not Islam’s? Whitewashing Islam’s troubling elements is no way to advance real dialogue, which must be based on truth.

Nor do Kreeft or his characters acknowledge the centuries-long persecution and abasement of Christians and Jews living in Muslim-controlled lands—abuse done in the name of Islam that continues to this day. Kreeft muses that perhaps the next St. Paul will be a Muslim. He fails to consider that perhaps the next Paul was a Muslim—before being martyred as an apostate.

While there are countless examples, I am thinking particularly of Zia Nodred, a blind Afghan linguist and Bible translator who was murdered in 1988 for his allegiance to Christ. “I have calculated the cost,” Zia said when warned that his life might be in danger, “and am ready to die for Christ, since he has already died for me on the cross.” Now that’s spiritual toughness.

In Kreeft’s commendable attempt to help Christians see Muslims as our neighbors rather than as the Other, Between Allah and Jesus blurs some vital theological distinctions. No, the author does not dispute that Islam’s Trinity-denying unitarianism contradicts God’s revelation. But ultimately he doesn’t see it as much of a problem.

“I believe General God is issuing new battle plans today,” Father Heerema tells ‘Isa, Libby, and Evan after a multifaith ministry to homeless people. “I think he’s trying to weld us together. Perhaps that’s why he’s letting us become less insistent about our old categories, about the old divisions among us.”

Father Heerema takes pains to assure ‘Isa he is not trying to convert him. Why not? Respectful dialogue should not preclude respectful witness between members of the world’s two great missionary faiths. Are those who risk life and limb to share the gospel with Muslims misguided? Kreeft doesn’t say. Kreeft’s characters, however, repeatedly indicate that relationships come before theology. In the chapter on Jesus and Muhammad, we have this exchange between ‘Isa and Father Heerema, starting with the Jesuit:

“I think an agreement about motives is an even deeper agreement than an agreement about theology. Jesus and the Pharisees had the same theology, but very different motives, very different states of soul.
“You are saying that religion is far more important than theology.
“Yes. Theology is the road map; religion is the journey.”
So where the heaven are we? The difference between Christians and Muslims on Christ’s identity—God Incarnate or simply another human prophet—is presented as real and regrettable, but hardly decisive. Father Heerema says ‘Isa can get to heaven based on his surrender to the God of Abraham, whatever his misunderstanding of Jesus. But understanding who Jesus is and what he has done for us in his death and resurrection (both of which Muslims deny) is not theological frosting that some of us can do without. It is the cake. Islam sees itself as a path guiding us out of ignorance. As Sura 1 prays, “Guide us to the Straight Path.” In contrast, Jesus said, “I am the Way.” In Islam the Word is a text; in Christianity, a Person. This Person is the sine qua non of our salvation.

Putting the focus on our submission, as Kreeft does, rather than on Christ’s submission, risks making religion all about our futile efforts to please God. Our inability to do so as lost, helpless sinners is the reason Jesus had to die, and why salvation must be by faith. No amount of striving—whether by Muslims, Christians, Jews, or atheists—can do the job. Only Christ can. Since Kreeft is searching for spiritual toughness in this book, one wishes he could have shown more of it on this point.

When Between Allah and Jesus ends, ‘Isa, who lives suspended between heaven and hell, is no closer to his namesake. Well, that’s not strictly true. While confirmed in his Islam—after all the arguments and counter-arguments, speaking and listening—he does seem closer to his flawed friends who also bear Christ’s name. And where relationship exists, deeper understanding may follow.

Dialogue may not be everything, but it’s a start.

Stan Guthrie is an editor at large for Christianity Today and author of Missions in the Third Millennium: 21 Key Trends for the 21st Century. His book All that Jesus Asks: How His Questions Can Teach and Transform Us will be published by Baker this fall.

Copyright © 2010 by the author or Christianity Today International/Books & Culture magazine.