Operation World: The Definitive Prayer Guide to Every Nation 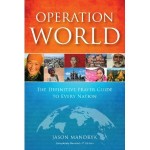 Operation World is probably the most significant book for the global missions movement. Biblica / Authentic (the publisher of my book Missions in the Third Millennium) will release the completely revised 7th edition in September, but you can go to Amazon.com and order it now. After nearly a decade of painstaking work, this edition was completed by the indefatigable Jason Mandryk, not the legendary Patrick Johnstone, so I am eager to see the changes.

Here is a seven-nation preview of the new Operation World. Let me know what you think, especially if you have owned and used any previous editions: