I received the following from Dinesh D’Souza about an interview on The Roots of Obama’s Rage he did this past weekend with Newsweek‘s Jonathan Alter (http://www.booktv.org/Program/1197/After+Words+Dinesh+DSouza+The+Roots+of+Obamas+Rage+hosted+by+Jonathan+Alter.aspx): 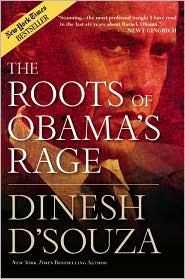 If you want to see one of the liveliest, most aggressive interviews ever aired on C-Span Book TV, it
[aired Sunday] at 9 pm Eastern.

Jonathan Alter of Newsweek interviews (or rather relentlessly attacks) me for “The Roots of Obama’s Rage.”

I believe you can also watch the program online. Since it first aired last night I have been swamped with emails
saying what a jerk Alter was. A number of these emails have also been sent to C-Span, and I’ll forward a few to you.

My book was also the subject of a petty, vindictive review in the Weekly Standard. That review is here.
http://www.weeklystandard.com/articles/roots-lunacy_508809.html

The review basically ignores the evidence of the book and focuses on my alleged factual errors which aren’t errors at all.
For instance, if you Google “Obama and British Petroleum” there are a number of news articles, from the New York Times to the London Telegraph, that report Obama did say “British Petroleum.” The U.S. ambassador to Great Britain is quoted saying Obama did say it and has agreed not to say it any more. So while Obama didn’t use the phrase in his main speech he did use it in subsequent comments.

Ferguson also faults me for trying to fit Obama’s conventional liberal stances, such as “NASA’s budget cuts,” into an
anti-colonial framework. But I wrote nothing about NASA’s “budget cuts.” Rather, I focused on Obama’s order to change
the mission of NASA into an outreach program to Muslims. This can hardly be explained as conventional liberal politics
and is very nicely explained on anti-colonial grounds. Ferguson is simply distorting my argument to make it look silly.

I cannot recall a more dishonest review in recent times. Of course Rush Limbaugh, Beck and Gingrich have lavishly
praised the book. But Gingrich’s comment that this is the most insightful book on Obama he’s read in six years seems
to have rankled some on the right. What does this say about what they have been writing about Obama all this time?
The implication is that these scribblers have completely missed the boat! Here we may have a clue to the roots of
Ferguson’s rage.

Anyway, the book continues at #4 on the New York Times bestseller list this week. I am swamped with positive emails from people who say that finally they have a grip on where Obama is coming from. Clearly the book has helped a large number of people. There are 200,000 copies in print, making this my most successful book.

FYI, I served as a consultant and editor for this book.