Off the Shelf: Restoring Beauty

Restoring Beauty: The Good, the True, and the Beautiful in the Writings of C.S. Lewis 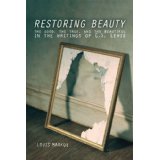 More and more in our modern and postmodern culture the twin concepts of beauty and truth have been separated both from each other and from their individual connection to a divine source of Beauty and Truth. Even as our public schools move further and further away from their connection to the universal moral code, the world of art (both “high” and “low”) embraces an aesthetic that privileges ugliness over beauty, nihilism over form, and radical self-expression over the pursuit of higher truth. As both an effective apologist for truth-based education and as a sub-creator of his own beauty-enhancing fiction, Lewis is the ideal guide for all those who would seek to restore truth and beauty to their proper place and role in our modern world.

Sections one and two analyze Lewis’s eleven novels (The Chronicles of Narnia, The Space Trilogy, and Till We Have Faces), showing how, through them, Lewis counters the growing cult of the ugly and helps restore a clearer understanding of the nature of good and evil. Sections three and four turn to Lewis’s non-fiction (The Abolition of Man, A Preface to Paradise Lost, and Surprised by Joy, among others) to assess what advice Lewis can give to beleaguered grade school and college teachers who would steer their students away from chronological snobbery and values-free education toward a true re-engagement with the past. The book concludes with an updating of Screwtape letters that exposes what Satan’s main temptation tactics have been since the 1960’s and a detailed bibliographical essay of books by and about Lewis.

I served as literary agent for Dr. Markos, a professor at Houston Baptist University, helping to get this outstanding volume published at Biblica. In Q&A format, here is what Louis Markos says about the book:

1)      Professor Markos, you have just finished a book “On Restoring Beauty:: The Good, the True, and the Beautiful in the Writings of C. S. Lewis.” What led you to write this particular book?

In the closing lines of his poem, “Ode on a Grecian Urn,” John Keats makes the memorable, if somewhat enigmatic claim that “beauty is truth, truth beauty.”  These five words, when filtered through the life and legacy of C. S. Lewis, provide the impetus and purpose this book.  With the help of C. S. Lewis, I wish to help restore goodness, truth, and beauty to their proper role and station in our society.

2)      I know that C.S. Lewis (or Jack as he often preferred to be called ) was a British scholar of the highest order, but perhaps you could summarize his life for the uninitiated.

Along with T. S. Eliot, C. S. Lewis is the greatest Christian academic of the 20th century.  His record as a student at Oxford was exemplary, and he is still considered one of the great authorities on Medieval and Renaissance literature, particularly Milton .  And yet, despite his excellent skills as a professor and his impressive publications, Oxford never honored him with what Americans would call a full professorship.  Their reluctance was certainly due to Lewis being so open about his Christian faith, but he was also penalized for “daring” to write “popular” books that could be understood and appreciated by non-academics.  Lewis also had the courage, in an overly specialized age, to be a generalist (what we often call a “Renaissance man”).

3)      C.S. Lewis was also known for his work with the “Inklings”. Could you briefly tell us about this aspect of his life?

Lewis was very close friends with J. R. R. Tolkien (author of Lord of the Rings); in fact, Tolkien played a decisive role in leading Lewis to faith in Christ.  The two formed a group known as the Inklings that met twice a week: once in Lewis’s apartments at Magdalen College , Oxford ; once at the Eagle and Child (or Bird and Baby) pub.  All the men who met together (they include Lewis’s brother, Owen Barfield, and Charles Williams) were Christians, but they met to discuss, not theology, but their works in progress.  At their meetings, they would read aloud their works and be critiqued by the others.  Together, they helped shape 20th century views of fairy tales and science fiction.  In imitation of the Inklings, many Christian (and also secular) groups have sprung up to read and critique each other’s works.

More and more in our modern and postmodern culture the twin concepts of beauty and truth have been separated both from each other and from their individual connection to a divine source of Beauty and Truth.  Even as our public schools move further and further away from their connection to the universal moral code, the world of art (both “high” and “low”) embraces an aesthetic that privileges ugliness over beauty, nihilism over form, and radical self-expression over the pursuit of higher truth.  As both an effective apologist for truth-based education and as a sub-creator of his own beauty-enhancing fiction, Lewis is the ideal guide for all those who would seek to restore truth and beauty to their proper place and role in our modern world.

5)      Are the schools in America concerned with teaching about art, music, the humanities, or have we descended (almost into one of the lower rungs of The Inferno of Dante) to a realm where we do not treasure the beauty of a tree ( I think that I shall never see- a poem as lovely as a tree ) or a sunset, or a wonderful picture or sculpture?

What we have done in our modern schools (as Lewis shows in The Abolition of Man) is that we have turned beauty into something that is totally subjective (that only exists in the eye of the beholder).  Just as our modern world says all morality is relative, so does it teach us that there is no such thing as absolute Beauty—there is only feeling and emotion.  In tandem with this “subjectivizing” of the arts has grown a belief that truth can only be found in facts, in observations, and in science (empiricism).  Together these forces have made the arts irrelevant to society and to the pursuit of truth.  Yes, we can say the poem or the sculpture or the concert is “pretty,” but we cannot learn from it; it can neither change our lives nor have a bearing on the decisions we make.

6)      I believe that some teachers, professors and parents are what C.S. Lewis may call “Men Without Chests” as they do not have the ego strength and integrity to stand up for what is important, pleasing, and aesthetic. Your thoughts?

Yes, the leaders of our society have lost their confidence in beauty, truth, and goodness.  We have all, in our own way, succumbed to the “bottom line.”  We only do that which is practical or that which will further our career.  We have lost those ideals that could turn otherwise blood thirsty knights into chivalrous defenders of the weak and innocent.  As Lewis explains it, teachers teach their students that notions of honor and chivalry are outdated and even sexist—and then, they are shocked when they discover that their students have plagiarized or gotten  girl pregnant!  Because we have turned Goodness, Truth, and Beauty into “personal choices,” we no longer treat them as universal, transcendent ideals that we need to live up to.

7)      We seem to live in a world of cultural relativism, and more simply “excuses”. We excuse people of their crimes due to mental imbalance or psychiatric problems. We excuse individuals because they have a “disability” or have gone through some trauma. Are we too quick to excuse or should we foster more responsibility?

We have given into an extremely juvenile sense of fairness that is no better than the nasty sibling who demands to have exactly the same piece of pie as his brother.  In a kind of self-destructive mania we have tried to create an absolutely level playing field that eradicates differences and pushes everyone down to the lowest common denominator.  Instead of striving for excellence (which can ONLY be done when we recognize and celebrate the differences between people), we force upon our students a bland, gender-neutral egalitarianism that makes everyone the same.  NOT all students have the ability to get an “A” in every class.  For that matter, not all teenagers should seek a liberal arts education.  Some would do better at a vocational school, or going directly into the work world.  Not all are athletes or singers or artists.  God made us different, and we need to celebrate those differences and learn to identify our own God-given gifts.

8)      Many years ago, a psychoanalyst, Rollo May wrote “My Quest for Beauty”.  I think the current age is more influenced by a yet to be written book called “My Quest for Money” or in the words of Gordon Gekko, “Greed is Good “. Is there any way to combat these values?

We can only fight this by building up the “chests” of our students—by filling them with higher ideals of the Good, the True, and the Beautiful.  And we (teachers and parents) need to value knowledge and beauty as ends in themselves (not as things that will “get us a job”).  We best fight gangs by establishing sports leagues that will allow these aggressive young men to find proper and ennobling channels for their aggression.  In the same way, we need to orient youthful dreams not just toward money but toward higher ideals and visions.

9)       If you could change one thing about American universities so that they could better direct students toward the good, the true and the beautiful, what would you change?

The biggest problem of modern academia is that it has fully given in to what Lewis calls (in Screwtape Letters) the “historical point of view.”  By this he means that when a modern professor is faced with an ancient book (Homer, Virgil, Dante, Shakespeare, Milton, etc.), there is one question that he never asks of himself or his students.  He will ask when it was written, what period it is part of, what influence it had on his age, and so forth.  But he will NOT ask the simple question: Is this book true?  The modern university no longer LEARNS from the Great Books; it only studies and categorizes them.  Only when a university (and its professors) really wrestles with the Great Books and encourages its students to take seriously the truths found in them (and part of taking things seriously is changing your beliefs and actions on the basis of those truths) will the university return to what it once was.