Off the Shelf: Recalibrate 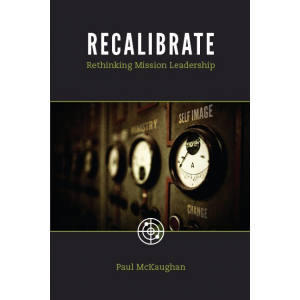 It is very difficult, if not impossible, for someone who has worked several years inside an organization to see it objectively, in context, as an outside observer. Because of his broad mission background and his incisive ability to make connections between cutting edge developments today and missions tomorrow, Paul McKaughan is uniquely positioned to help leaders see their organization from many different viewpoints and to project their paths into the future.

I have just returned from meeting with my friend Paul McKaughan at a local Starbucks. Paul has been driving around the country in an RV for the last five years, talking with and coaching missions leaders. He estimates he has spoken with 1,000 people in that time frame, so he is well suited to write this book. Paul thinks much is happening at the “periphery” of the North American missions movement, and he is one of the few with the life experience to put it in context. I’m looking forward to reading this volume.