I’m Reading: The City of Gold and Lead

The City of Gold and Lead 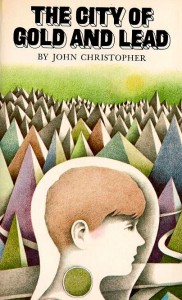 Long ago, the Tripods–huge, three-legged machines–descended upon Earth and took control. Now people unquestioningly accept the Tripods’ power. They have no control over their thoughts or their lives. But for a brief time in each person’s life–in childhood–he is not a slave. For Will, his time of freedom is about to end–unless he can escape to the White Mountains, where the possibility of freedom still exists. The Tripods trilogy follows the adventures of Will and his cohorts, as they try to evade the Tripods and maintain their freedom and ultimately do battle against them. The prequel, When the Tripods Came, explains how the Tripods first invaded and gained control of the planet.

I’m actually on the second book in the trilogy (not counting the prequel, which I have also read). My son Peter alerted me to the series, and it is a good read, not too intense, with an interesting premise and good characters. As a formerly heavy sci-fi reader, I’m surprised I had never heard of the creepy Tripods. So far, God has not figured in at all, except in the comment of one “capped” minister, who said that perhaps the Tripods represent the Second Coming. I prefer to see the series as a parable about how a liberal government takes over all the essentials of life, making independent thought and initiative unnecessary.