Sen. Rick Santorum: I Draw No Line Between My Faith and My Decisions 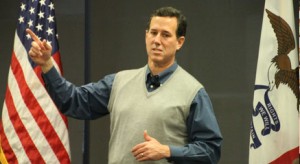 The Pennsylvania Republican speaks on legislating morality, why he was right about anti-sodomy laws, and his 2006 opponent-apparent, Bob Casey Jr.

As Rick Santorum gets a turn as the conservative option to Mitt Romney, and with the Iowa caucuses just a few days off, I thought today would be a good time to re-post an interesting, and lengthy, interview I did with the senator back in 2005. The issues have changed somewhat, of course (Casey eventually defeated Santorum amid a strong Democratic surge), but I think you’ll get a good feel for the candidate who is experiencing a late and unexpected run in Iowa.