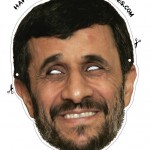 Some people just don’t get satire.

Fars News Agency, described as “Iran’s leading independent news agency,” was the latest in a proud tradition to mistake an Onion story for the real deal. The Onion’s signature deadpan description of a poll finding that the “overwhelming majority of rural white Americans said they would rather vote for Iranian president Mahmoud Ahmadinejad than U.S. president Barack Obama” was lost on the Iranian news service, which ran a story about the poll — which it later took down.

The funniest story I’ve seen in months–Ahmadinejad fell for the trick, and this story is the treat!