Give Them the Bill 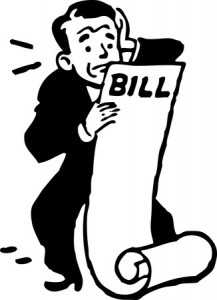 The American people have voted for big government and the welfare state, assuming that “the rich” can pick up the tab. The annual trillion-dollar budget deficits that Barack Obama has given us should disabuse them of that notion. Never have the wealthy paid a bigger share of federal taxes than they do now, and yet never have our deficits been bigger. Revenue is about where it was before the recession and financial panic hit, so clearly the problem is not revenue, but spending–unless more people pay taxes.

The only real way to get more revenue to pay for this monstrosity is to ask everyone to put some skin in the game. Politicians ought to say to the voters, “Okay, this is how much government you say you want, and here is how much it is going to cost you.” Then they ought to give every citizen a bill, based upon proportionate pain–say, 20 percent of income and benefits. Then we’ll see how compassionate the voters are, not with someone else’s money, but with their own. I have a hunch that, at that point, people will start getting serious about cutting spending.