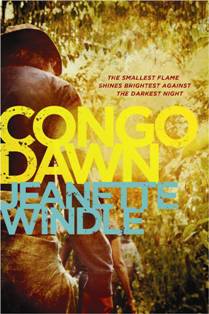 Jeanette Windle, whom I serve as literary agent, has written 16 novels of international intrigue, including her latest, Congo Dawn (Tyndale House, 2013). Jeanette tells about how her background as an MK set the stage for her writing exploits.

Where did you get your international perspective?

As daughter of missionary parents, I grew up in the rural villages, jungles, and mountains of Colombia, now guerrilla hot zones. I married another missionary kid, and we have been in full-time international ministry ever since. I’ve lived in six countries and traveled in more than 30 on five continents. Those experiences have birthed 16 international intrigue titles.

What moved you to write Congo Dawn?

Growing up in the world’s largest rainforest, the Amazon, I was captivated by missionary biographies from its second-largest African counterpart, the Congo. Among them the story of Dr. Helen Roseveare, who helped establish several mission hospitals and medical training centers in the Ituri rainforest despite violence and unrest of impending Congolese independence. She was held captive for five months during the 1964 Simba rebellion. The largest of those centers. Nyankunde, was razed in 2002 in the ongoing conflict that has taken more than 5 million Congolese lives in the last decade. Today’s fighting is greatly aggravated by the value and pursuit of what are known as “conflict minerals” in that zone.

As always, it has been the mission pilots, medical personnel both expatriate and Congolese, and other followers of Yesu, Jesus Christ, who have been first back into the conflict zones well ahead of United Nations, embassy, local law enforcement or any other humanitarian and corporate interests. Their courage in shining bright the light of Yesu’s love in one of the planet’s darkest corners gave voice to this story.

How did you come up with the concept for Congo Dawn?

For the story’s actual suspense thread, I’ve had personal opportunity to witness what a multinational corporation is capable of in dark corners of the Third World when no one is watching–an experience in itself too unbelievable to write up as fiction. In Africa as elsewhere, both the protective and striking arm of such corporations has historically been hired foreign mercenaries. But today’s private military corporations are vastly different, possessing more firepower than the average country. What struck me was the lack of any accountability to outside oversight beyond some paid-off local warlord.

So what happens when a multinational corporation with unlimited funds hires on a private military company with unbridled power in a Congolese rainforest where the ultimate ‘conflict mineral’ is up for grabs? Coming up with one very plausible possibility birthed Congo Dawn.

On a deeper spiritual level, Congo Dawn addresses the age-old question of how a world filled with such darkness, injustice and pain can possibly be the creation of a God of love. How can followers of Yesu, Jesus, in the bleakness of an Ituri rainforest conflict zone or any other dark corner of this planet take seriously a scriptural mandate to rejoice in their suffering? What value beyond our own comprehension might human suffering possibly hold that a loving Creator God permits it to continue?

What message would you like your readers to take from Congo Dawn?

The same simple, yet profound realization to which Congo Dawn’s main protagonists are ultimately drawn. The coexistence of a loving Creator with human suffering is no oxymoron, but a divine paradox those refined in the fires of adversity are best equipped to understand. The smallest flames of love and faith shine most brightly against the darkest night. Our heavenly Father really does know what He’s doing, and His ultimate plans for our lives and all His creation will not be thwarted.