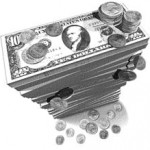 Five years and $800 billion after President Obama’s “stimulus,” not only do we not have the jobs he promised, we have fewer jobs than he said we would have if Congress didn’t pass the “stimulus.” In other words, according to Team Obama’s own economists, we have fewer jobs than we would have if we had done nothing five years ago–and we’re nearly a trillion dollars deeper in debt.

Friends, this isn’t monopoly money. It’s our money. And Congress just gave the president another blank check on the debt ceiling?