Off the Shelf: Nightmare City 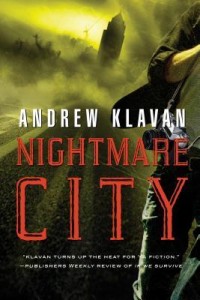 Klavan combines elements of mystery and horror genres in this title (Thomas Nelson, 2013). As a reporter for his high school newspaper, Tom Jordan writes a story that enrages many, in which he claims that the championship football team of three years ago used steroids and other drugs to improve their performance on the field. After experiencing backlash from his article on many fronts, Tom wakes up to an empty house and a silently eerie, fog-filled world. Where is everyone? Why are there monstrous creatures chasing him? Friends from school appear, but they are ghostlike, and it soon becomes apparent that there are very few people Tom can trust. Then the plot twist is revealed, connecting the newspaper story with the terrifying images Tom is experiencing. Suspense is built by the methodical pacing. … Give this to your Stephen King fans.

John Wilson gave me a copy of this book because he knows I have boys. Last night my older son, Peter, read it in a few hours. His review: “pretty good,” though he said he could see how the plot would unfold ahead of time.