By Bill O’Reilly and Martin Dugard 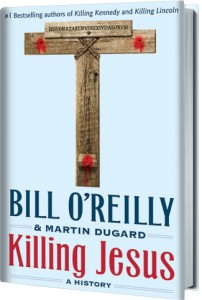 Now the anchor of The O’Reilly Factor details the events leading up to the murder of the most influential man in history: Jesus of Nazareth. Nearly two thousand years after this beloved and controversial young revolutionary was brutally killed by Roman soldiers, more than 2.2 billion human beings attempt to follow his teachings and believe he is God. Killing Jesus will take readers inside Jesus’s life, recounting the seismic political and historical events that made his death inevitable – and changed the world forever.

I know, I know, I’m a bit late to the party. I didn’t expect a lot new here, and there isn’t. But my mom sent it to me, which means a lot, and so I read it. Killing Jesus is an interesting page-turner that will help readers see the historicity of Jesus Christ, his life, and his death–and for those with eyes to see, his resurrection. Despite a few minor problems (I believe, for example, that the best scholarship denies that Mary Magdalene was a prostitute), I got a renewed sense of thankfulness for the actuality of all Jesus did for us.