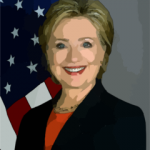 First Barack Obama, now Hillary Clinton. The Democrats have apparently decided that accomplishments no longer matter in their presidential candidates. They go simply for those with charm (Barack) or longevity (Hillary). An actual track record of deeds done is unnecessary now.

The saddest part: Too many Americans are more than happy to vote for them.