Just Out: My Final Word

My Final Word: Holding Tight to the Issues that Matter Most

By Charles Colson, with Anne Morse 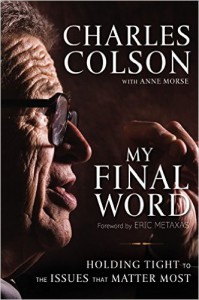 One of the most respected and influential Christian leaders of the last several decades, Chuck Colson engaged millions through his books, public speaking, and radio broadcasts.

In My Final Word, longtime Colson coauthor Anne Morse has selected and arranged pieces Colson wrote mostly during the last decade of his life, spotlighting what he saw as key topics of ongoing importance for Christian cultural engagement.

I served as a consulting editor for this exciting project. Current trends and events show that Chuck Colson never goes out of style.