An Open Letter to Leaders in the Evangelical Community

By A Coalition of Wheaton College Student Leaders 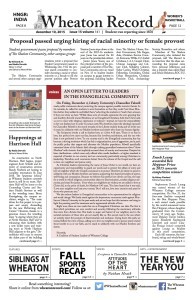 On Friday, December 4, Liberty University’s Chancellor Falwell made public statements about protecting the campus against possible terrorist threats. In his remarks, he called for students to arm themselves so that they could “end those Muslims before they walked in and killed them,” exhorting the students to “teach them a lesson if they ever show up here.” While these sorts of remarks epitomize the ever-growing fear and hostility directed toward Muslims, we as Evangelical Christians hold that Christ calls us not to react with religious oppression or violence—instead, we have the responsibility to live out fearless love in order to pursue unity. We, therefore, reject the ideology espoused by Chancellor Falwell in his recent remarks to the Liberty student body, and we invite you to stand in solidarity with our Muslim brothers and sisters who share our human dignity.

I applaud the students for responding to Mr. Falwell’s, at best, poorly worded statement (though I prefer dialogue to condemnatory public statements used against fellow believers). But I wish they had been a little more careful with their own words. For evangelical Christians to call their Muslim neighbors “our brothers and sisters” is theologically imprecise, at best.