I know George W. Bush’s record as president is mixed, to say the least, but think about what we didn’t have as a nation when he was commander in chief just a few short years ago: 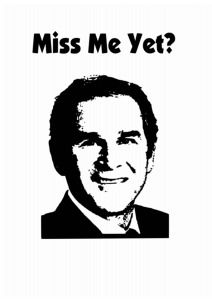 — terror attacks on our soil;

— the redefinition of marriage;

— presidential candidates who should be in prison;

— so many whiny college students who are embracing socialism;

— race relations at a new low;

— police officers hated in many parts of the country;

— Iraq and Libya in chaos;

— an economy stuck in neutral;

— choking levels of taxation and regulation;

— an executive branch that thumbs its nose at Congress and isn’t shy about bullying states, and even religious groups such as Little Sisters of the Poor, to impose its progressive agenda on the nation.