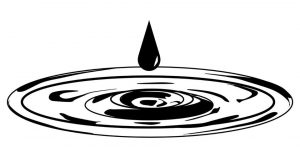 When evening came, his disciples went down to the sea, got into a boat, and started across the sea to Capernaum. It was now dark, and Jesus had not yet come to them. The sea became rough because a strong wind was blowing. When they had rowed about three or four miles, they saw Jesus walking on the sea and coming near the boat, and they were frightened. But he said to them, “It is I; do not be afraid.” Then they were glad to take him into the boat, and immediately the boat was at the land to which they were going.