Here’s something Jerry Root and I wrote about Billy Graham in our book, The Sacrament of Evangelism (Moody Publishers, 2011): 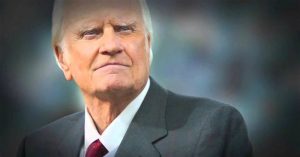 “Evangelistic preachers almost always have an altar call. They ask people to make a decision—or to make public the decision they have already made in their hearts. Why? Simply because God seems to work when they do.

“Stan used to work at Wheaton College’s famous Billy Graham Center. In his three years there, Stan never had the opportunity to see the renowned preacher in the flesh—except once. Graham and his team had scheduled a June crusade at the RCA Dome in Indianapolis, and Stan and other BGC staffers and family members were invited to ride down in a chartered bus from the Chicago area to attend.

“That warm night Graham, who was getting well on in years, needed help to get to the podium. His youth and energy were things of the past, yet his commitment to see people come to Christ was undimmed. His message, as always, was simply about our need to trust Christ. Truth be told, the sermon was not notable for its erudition, and Stan quickly forgot it.

“But he didn’t forget Graham’s simple but powerful invitation at the end—and the thousands of people who streamed forward in response. Mothers, daughters, fathers, and sons came down to floor level as the music for ‘Just as I Am’ played. The Holy Spirit, working through the prayers, preparation, preaching, and invitation, was palpably present, and people responded. He will make his presence known through us, too.”