Off the Shelf: The Triumph of Christianity

The Triumph of Christianity: How the Jesus Movement Became the World’s Largest Religion 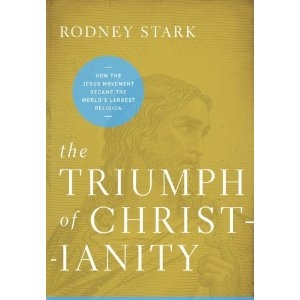 More than 40 percent of the people on earth today are Christians, and their number is growing more rapidly than that of any other major faith. In The Triumph of Christianity, acclaimed religious and social historian Rodney Stark explains how an obscure Jewish sect became the largest, most thriving religion in the world. …

With his signature knack for making the boldest and most original scholarship accessible to all readers, Stark presents the real story behind the tragedies and triumphs that have shaped the trajectory of the Christian faith and, indeed, much of global history. For scholars and armchair historians alike, this is a brisk and thought-provoking journey through events we think we know—and need to reconsider.