I’m Reading: Rush Limbaugh: An Army of One

Rush Limbaugh: An Army of One 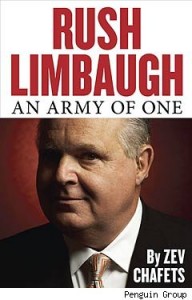 People tend to remember the moment they first heard The Rush Limbaugh Show on the radio. For Zev Chafets, it was in a car in Detroit, driving down Woodward Avenue. Limbaugh’s braggadocio, the outrageous satire, the slaughtering of liberal sacred cows performed with the verve of a rock-n-roll DJ-it seemed fresh, funny and completely subversive. “They’re never going to let this guy stay on the air,” he thought.

Almost two decades later Chafets met Rush for the first time, at Limbaugh’s rarely visited “Southern Command.” They spent hours together talking on the record about politics, sports, music, show business, religion and modern American history. Rush opened his home and his world, introducing Chafets to his family, closest friends, even his psychologist. The result was an acclaimed cover-story profile of Limbaugh in The New York Times Magazine.

But there was much more to say, especially after Limbaugh became Public Enemy Number One of the Obama Administration.

I find Rush to be an immensely talented, insightful, and entertaining political commentator–though significantly limited in terms of careful analysis or moral insight. I’m looking forward to learning his life story and how that has shaped him. I’ve interviewed his brother, David, and so hope to learn something about him, too.

2 Responses to I’m Reading: Rush Limbaugh: An Army of One