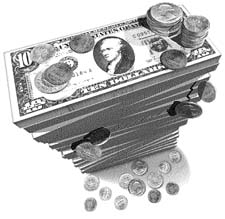 Bill and Hillary Clinton profited immensely from their relationship with the Swiss bank UBS … but not for nothing. When UBS ran afoul of the IRS, Madam Secretary of State fixed it for them. Subsequently UBS paid the former president $1.5 million in “speaking fees” and donated $600,000 to the Clinton Foundation. Only a fool (or a Democrat) would claim that there was absolutely no quid pro quo.

Donald Trump, the front-running “Republican” presidential candidate, admits that as a businessman he donated freely to the Clinton Foundation in exchange for access and influence, because that’s what a businessman does. It’s all about “the art of the deal,” right? Trump is being praised for his honesty, in contrast to the other candidates on this issue. Fair enough, I suppose.

Tonight during the prime-time debate, I hope that one of the journalists at Fox News, or one of the other candidates, asks the bombastic Mr. Trump what he got out of the deal from such “donations” to the Clintons and other politicians. Maybe it was “help” with the IRS, or an airport, or relief from regulations. Taxpayers (and voters) have a right to know.

Trump has made a living out of attacking the character and competence of his Republican opponents while speaking in glittering generalities about his own record. Let’s see if “The Donald” can handle a tough question about his own conduct.