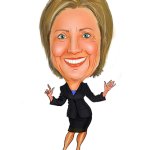 It should be interesting to see tonight whether the liberal debate moderators and the other Democratic candidates hold Hillary’s feet to the fire about anything she has said and done. Frankly, I think the Democrats writ large are running a version of the four-corners offense, hoping to simply run out the clock and give her the nomination. I still cannot believe that a large chunk of American voters thinks that this craven, corrupt, and unaccomplished politician is the person best suited to occupy the Oval Office.