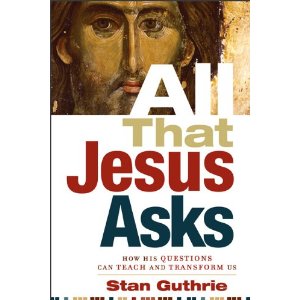 Because Jesus was raised, His friends will also be raised. Before His death and resurrection, Jesus shared some encouraging words with His disciples. The meditation that follows reflects on John 14:1-4 and His question, “If it were not so, would I have told you that I go to prepare a place for you?” It is taken from my book, All That Jesus Asks. May you have a blessed Easter.
—
I find his use of the word prepare (Greek: hetoimazo) fascinating. We encountered this word at the beginning of this book when John the Baptist told the masses to “prepare the way for the Lord.” Such preparations in the Baptist’s day were substantial and deeply personal. Jesus chose the same word when he told the disciples to prepare the Upper Room for the Last Supper at Passover, the very room in which he is now speaking. Such preparation was considerable. It involved sacrificing the lamb at the temple, roasting the lamb, getting the room ready for the meal, and cooking the side dishes.

Jesus says here, “Trust me; while I am gone, I will be making elaborate preparations for you, and then I will take you to the feast.” Indeed, Jesus tells his disciples at this sad Upper Room meal, “I tell you I will not drink again of this fruit of the vine until that day when I drink it new with you in my Father’s kingdom.” But the kingdom feast will come.

He also says he will prepare a place. His use of the Greek word for place, topos, from which we get our word topography, is equally intriguing. It basically means a definite, specific area: “a solitary place,” “a place called Golgotha,” “the place where he lay,” and so on. The topos where we will feast with Jesus in his Father’s house is real and definite, prepared with ultimate care by the master Carpenter. And remember that he has been preparing this special place for us over the last two millennia. No detail will be missed.

Some Christians worry that if heaven involves simply sitting on clouds and strumming harps for eternity then they’ll be eternally bored. But the afterlife will be much more than this—perfectly fitted to us, satisfying our deepest desires, forever. As Lewis notes:

“All the things that have deeply possessed your soul have been hints of it—tantalising glimpses, promises never quite fulfulled, echoes that died away just as they caught your ear. But if it should really become manifest—if there ever came an echo that did not die away but swelled into the sound itself—you would know it. Beyond all possibility of doubt you would say ‘Here at last is the thing I was made for.’ We cannot tell each other about it. It is the secret signature of each soul, the incommunicable and unappeasable want, the thing we desired before we met our wives or made our friends or chose our work, and which we shall still desire on our deathbeds, when the mind no longer knows wife or friend or work.”

If it were not so, would Jesus have told us otherwise?