Review of Billy Graham: An Ordinary Man and His Extraordinary God

Billy Graham: An Ordinary Man and His Extraordinary God 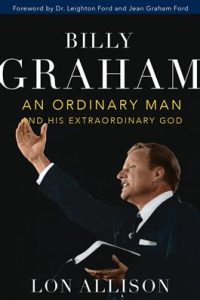 With all the books out there about Billy Graham, do we really need another? Lon Allison, former executive director of the Billy Graham Center at Wheaton College, says Graham’s recent death provides a fresh opportunity to look at the man and his message. The result is Billy Graham: An Ordinary Man and His Extraordinary God (Paraclete Press, 2018).

Allison has written this attractive hardcover volume for “a generation that has never heard of Billy Graham.” So he has kept the writing informal and pastoral, with frequent asides to explain key points to the uninitiated about the man and his evangelical theology.

The approach is thematic, rather than strictly chronological, with chapters on the beginning and growth of Graham’s career, key spiritual influences, his underappreciated role in civil rights, mistakes made (particularly his unseemly cozying up to Richard Nixon), and his conflicted but loving approach to his family.

Graham’s humility shines through on nearly every page. When Allison was about to be named as head of the BGC, he was whisked up to Ottawa, where Graham was holding a crusade, to meet the evangelist. In the bowels of the stadium, as thousands streamed in above them, a nervous Allison spoke with the aging legend. The two men talked about family. Graham asked Allison about his plans for “the Wheaton Center” (never calling it “the Billy Graham Center”).

Then Graham learned that Allison had earned his doctorate from Gordon-Conwell Theological Seminary—an institution that Graham had helped found—on the subject of evangelistic preaching in the 21st century. The great evangelist put his hand on Allison’s shoulder and asked in utter sincerity, “Do you think you could teach me some things about preaching the gospel better?”

Allison, who is an accomplished evangelist himself, departs from previous treatments of Billy Graham by repeatedly highlighting the gospel that he preached, following the evangelist’s desire that people focus not on him but on the God who had saved him.

In describing “an ordinary man and his extraordinary God,” Allison has succeeded admirably.