Off the Shelf: The Chiveis Trilogy 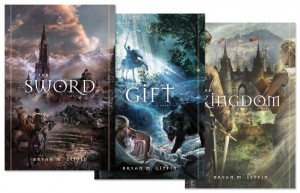 Bryan M. Litfin’s three-volume once-and-future fantasy, The Chiveis Trilogy, is now complete with the publication of The Kingdom. I have read the first two books and look forward to this final volume. Litfin has done an amazing job bringing to life a world that helps us see the old faith in a new light. Here is a description of the set:

Four hundred years from now a deadly virus and nuclear war have destroyed the modern world. Those who survived have returned to a medieval-like age of swords, horses, and feudal kingdoms. Yet the breathtaking mountain realm of Chiveis lives in peace, protected from the outside empires and obedient to its own gods.

But when Teo, an army scout, and Ana, the beautiful daughter of a farmer, discover an ancient book, everything begins to change in Chiveis—old beliefs give way to new faith, persecution rises, and the kingdom’s darkest secrets begin to surface.